At 92, the iconic labor activist continues to fight for workers' rights. 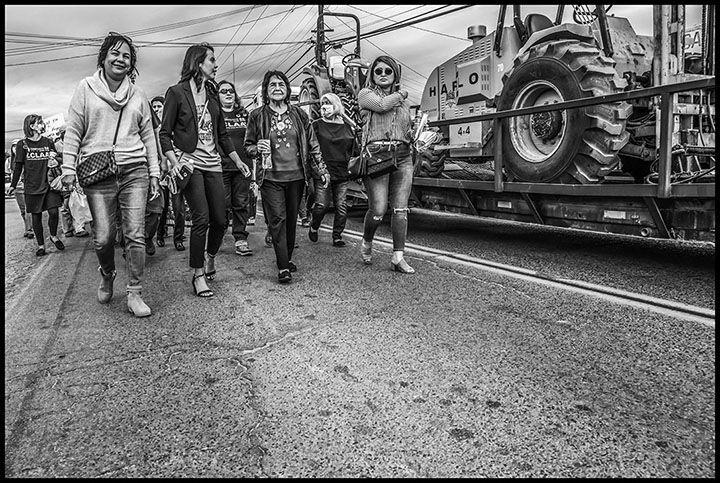 Dolores Huerta marched with family members of Larry Itliong, revered Filipino labor organizer and UFW co-founder, and Mari Perez, co-director of the Larry Itliong Resource Center, in celebration of the declaration of Larry Itliong Day by the State of California.

(All photos © by David Bacon.  These photographs are taken from a larger body of images in the David Bacon Archive in the Special Collections of the Green Library at Stanford University.  For a full selection of photos click here.)

Dolores knew who I was because she knew the world I come from. I grew up in a family of farmworkers. All of us worked in the fields, picking peaches and grapes and cotton, from the time I could walk. I never understood how it could be that our family all worked so hard, and yet never emerged from poverty. In that world of rural California, it was the grape strike and the boycotts that taught us that the only way to end that poverty and stop injustice was to organize together to change it. It was the United Farm Workers who taught us that. For me, Dolores was the best teacher among many good ones, teaching me the power of the union and nonviolent action.

Over the years, Dolores became my friend and mentor. In her I could see a woman of color who became a union leader-a leader of our movement for social justice. She never backed down or wavered. If she could do it, so could I.

Dolores Huerta turns 92 on April 10. Amazingly (or maybe not), she is still organizing, still fighting, still challenging us all to stand up, organize and make this world a better place. The best way we can celebrate this extraordinary woman is to join her. Every speech I've ever heard her give ends with her getting us all to shout out, "Si, se puede!" So let's shout it out with her now-Si, se puede! 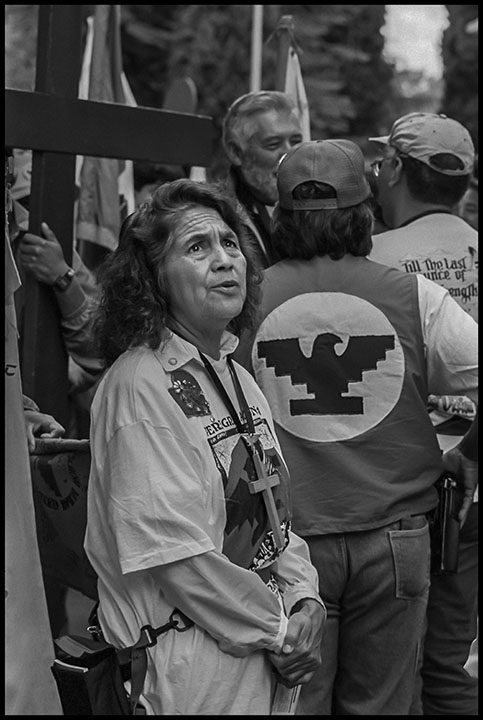 Dolores Huerta and other farmworkers who marched for 20 days to Sacramento wore wooden crosses to show their status as peregrinos.

Long before the Delano Grape Strike began in 1965, Dolores Huerta earned her stripes as an organizer working with the radical Filipinos of the Agricultural Workers Organizing Committee in her native Stockton, even recruiting Larry Itliong, the veteran Filipino organizer of the canneries and fields of the Pacific Northwest. The migration of the indigenous people of Oaxaca, which brought myself, Rufino Dominguez, and other radicals into the California fields, came in the 1980s. By then Dolores was a legend, but to us someone who shared our ideas about organizing and radical social change.

Dolores Huerta's life is part of our collective history of resistance. She is a living link between radical ideas for social change that have defined today's movements for racial justice, worker rights and feminist thought.

We even owe her the chant that all of us know and use almost daily, regardless of what part of the movement we come from. In May 1972, the Arizona legislature passed a growers' bill denying farm workers the right to strike and boycott. When Cesar Chavez started a fast to protest, it fell to Dolores to build people's resistance in the streets. Everyone told her resistance was futile. In a moment of inspiration Dolores responded, ¡Si, se puede! (Yes, it's possible!). Ever since, when we need to show our strength and knowledge that we'll eventually win, we all shout out, ¡Si, se puede! A march and rally to organize strawberry workers in Watsonville begins with Huerta denouncing company terror tactics to the media.

Last fall I walked from Poplar to Delano, Calif., in honor of Larry Itliong, who started the 1965 grape strike and boycott there, with Dolores Huerta, cofounder of the United Farm Workers (UFW). She was 91 then, and I had a hard time keeping up. She sent me a note afterward that ended, "Sí Se Puede con El Rojo Tocino." It was a beautiful joke.

"Sí Se Puede" are three words we all use now, but she invented this confident way of saying "Yes We Can!" "Tocino" was the nickname the union gave me in the years I worked as an organizer-it means "bacon," my last name. And calling me "El Rojo," or "The Red," in this way honored my politics.

When I came back from a solidarity work brigade in Cuba in the 1970s, I landed in New York City with no place to sleep. I called Dolores's daughter, Lori, a friend from California. Not only did I get space on the floor of the NYC boycott's headquarters, but Dolores and her partner, Richard, César Chávez's brother, took us out to eat. Over pizza I enthused about the island. I had stars in my eyes, for both Cuba and Dolores, and still do. I went to work for the UFW as an organizer a few months later.

There was often tension in the union about radical politics, and being called a red was sometimes the route out the door. But for Dolores and Eliseo Medina, being a good organizer was the bottom line-doing what the workers needed.

Over the years, long after I had left the UFW and worked for other unions and then as a photojournalist, I would see Dolores again and again. Going to Watsonville to cover the organizing drives of strawberry workers or to Salinas for the strikes in the vegetable fields, I knew she'd be there. It was a profound experience to watch her in union contract negotiations-this diminutive woman facing off against the beefy growers across the table-and see the sense of power it gave workers.

Returning from Iraq, where I photographed workers after the 2003 US invasion, I took her picture in the front line of marchers against the war. When we were in Sacramento trying to stop the anti-immigrant, anti-affirmative-action, anti-bilingual initiatives, she was the first to speak out.

So when she called me El Rojo Tocino, I thought, "What a compliment!" I hope I live up to it. 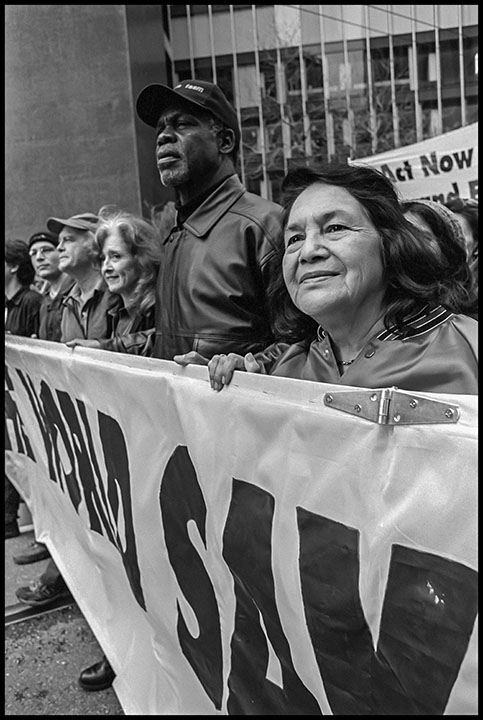 At the beginning of the Iraq War, Huerta marches with actor Danny Glover and an enormous crowd demanding that the troops be brought home. 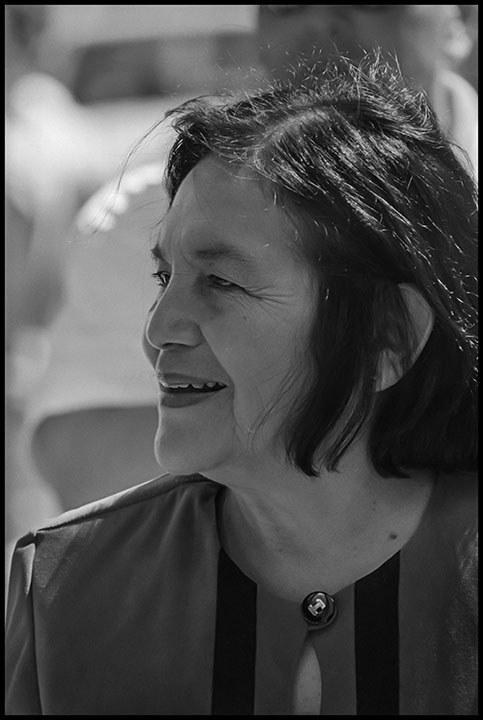 Dolores Huerta at a march calling for making Cesar Chavez' birthday a holiday in California. 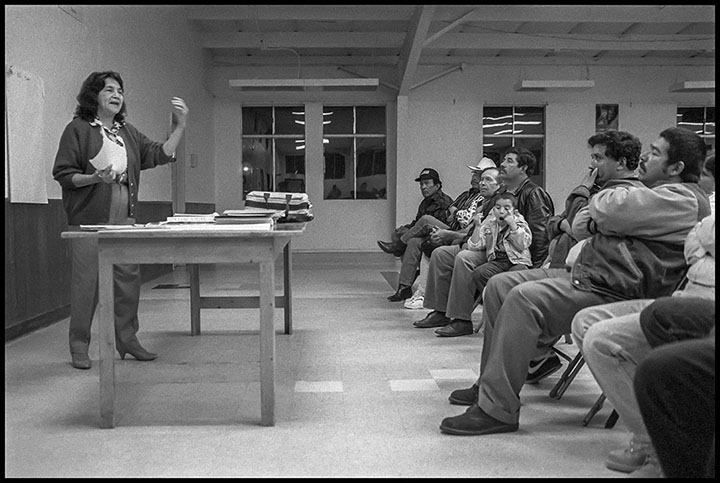 Huerta explains to a meeting of rose workers the progress of negotiations of their union contract, at the UFW's historic Forty Acres headquarters. 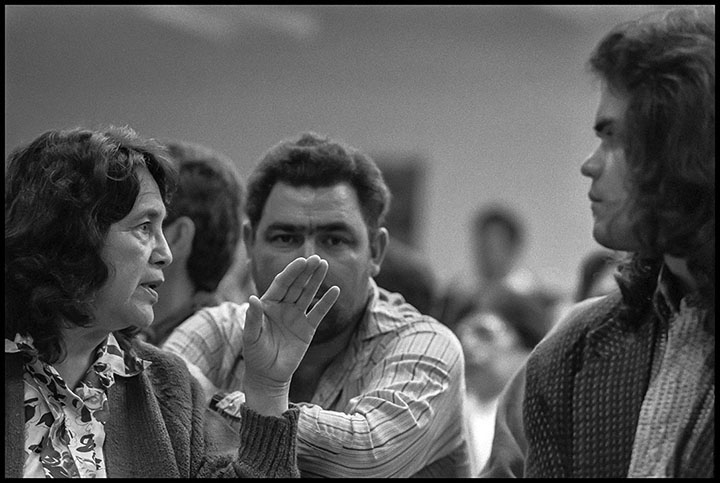 Huerta and rose workers talk about the harassment of workers and women in the fields. 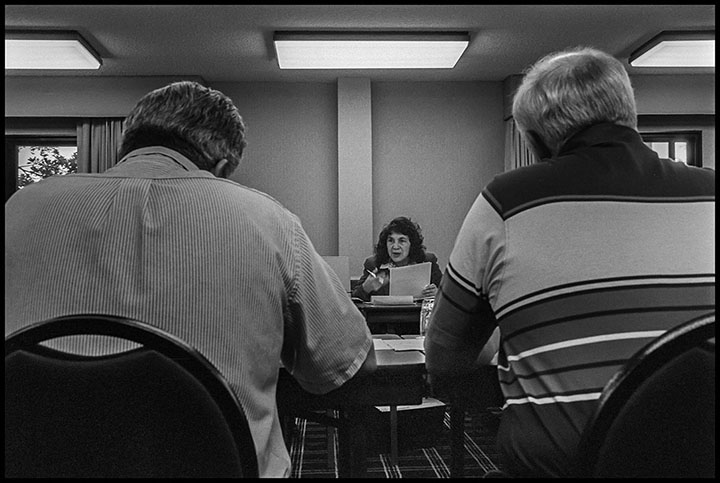 Huerta presents the union's proposals for a fair contract to the managers of the Bear Mountain Rose Nursery in the San Joaquin Valley. 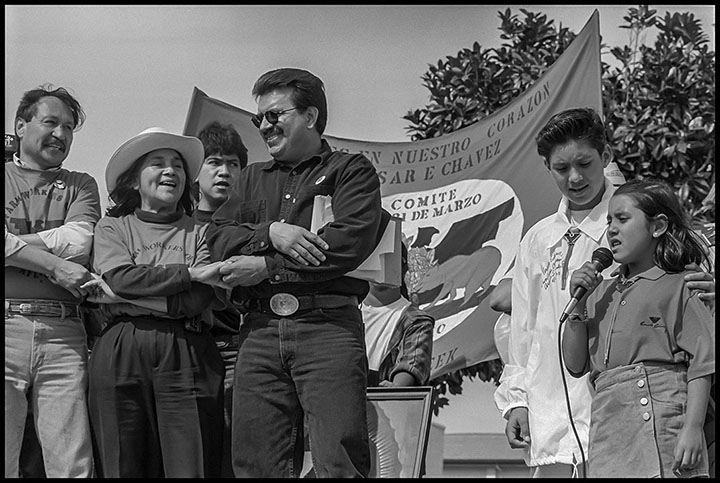 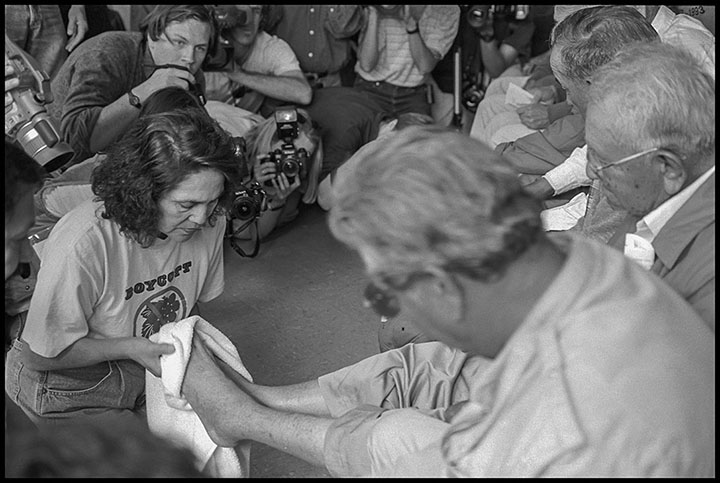 The year after the death of Cesar Chavez Huerta and UFW leaders begin a march to Sacramento by ritually washing the feet of the workers who founded the union in the 1965 grape strike. 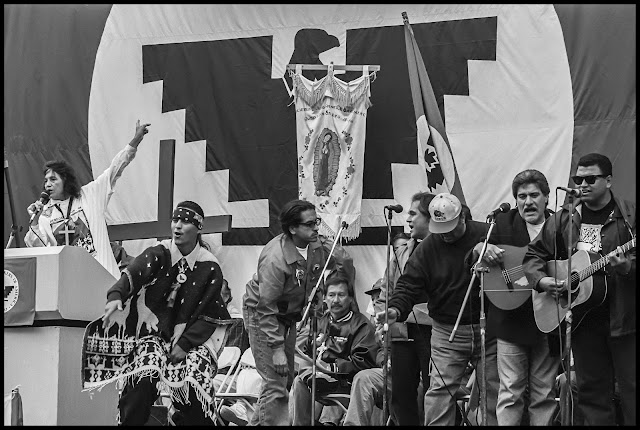 At the Sacramento rally on the state capitol steps at the end of the march. 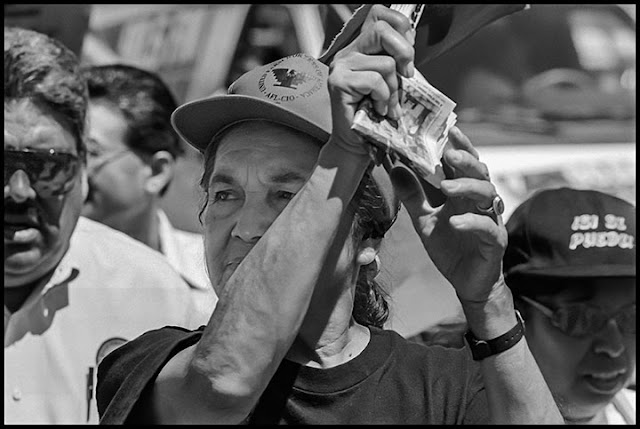 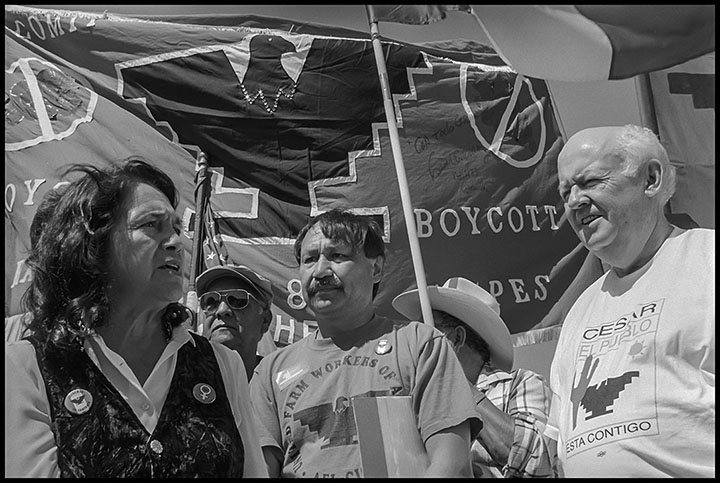 Huerta and Rodriguez organized a march and rally in Salinas to support the campaign by John Sweeney to become president of the AFL-CIO. 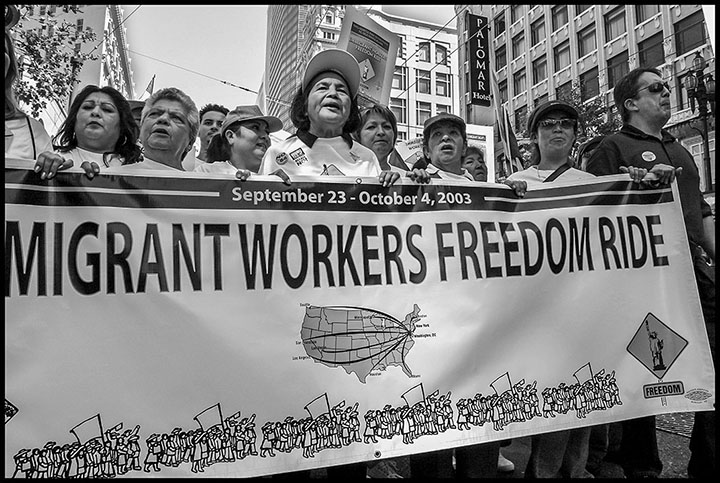 At the start of the Immigrant Workers Freedom Ride in San Francisco, Huerta and hotel workers marched to demand immigrant reform. 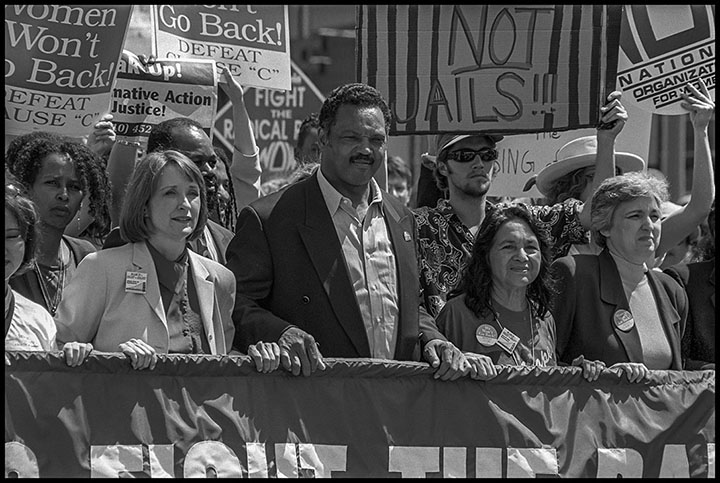 Huerta, the Rev. Jesse Jackson, and the head of the National Organization of Women lead the March Against the Right in San Francisco. 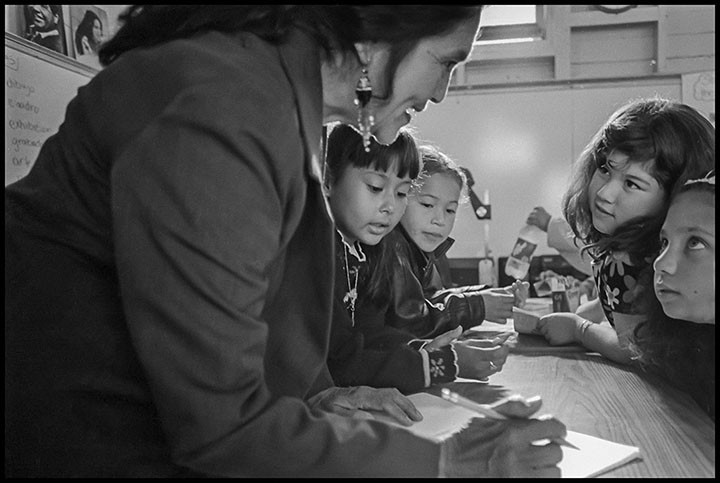 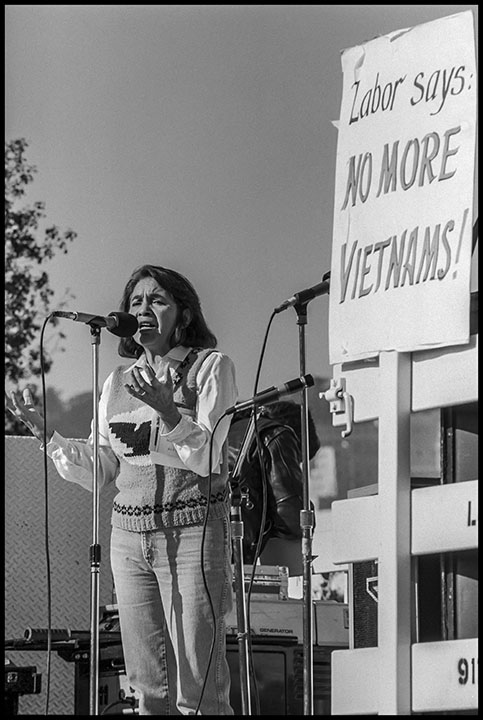 Huerta speaks at a rally of longshoremen in San Francisco who have refused to unload coffee from El Salvador during the Central American civil wars. 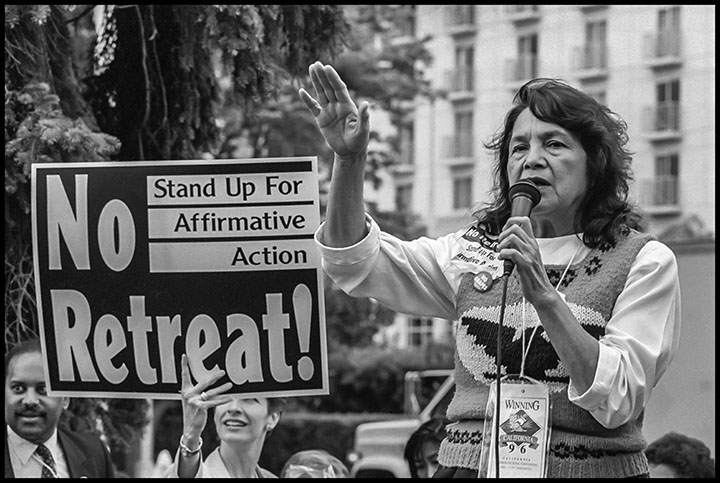 Huerta speaks at a Sacramento rally supporting affirmative action, and opposing what would eventually become Proposition 209.

David Bacon is author of Illegal People-How Globalization Creates Migration and Criminalizes Immigrants (2008), and The Right to Stay Home (2013), both from Beacon Press. His latest book, More Than a Wall/Mas que un muro, will be published next month by the Colegio de la Frontera Norte.  For more information about it, write to dbacon@igc.org

Posted by davidbacon at 9:26 PM