In October in California's farm worker towns, the unemployment rate starts to rise as the harvests end.  In Coachella, not far from the wealth of Palm Springs, one of every eight workers has no job.  In Delano, where the United Farm Workers was born in the grape strike 50 years ago, it's one of every four, as it is in other small towns of the southern San Joaquin Valley.  On the coast in Santa Maria and Lompoc the rate is 13.8 and 15.5% respectively.  In the Imperial Valley, next to the Mexican border, the unemployment rate is over 26% in Brawley and Calexico.

This is a reality invisible to the state's urban dwellers.  Los Angeles has a high unemployment rate for a city, but it is still less than rural towns at 8.7%, or one of every twelve workers.  And in San Francisco and Berkeley the percent unemployed is 4.3 and 5.9 -- less than a quarter of the rate in Delano.

Then the winter really hits.  By February one of every three workers in Delano and Arvin is unemployed.  In Salinas it goes from October's one in ten to February's one in five.  Coachella is one in every six.  And in Brawley, Calexico, Lompoc and Santa Maria unemployment just never goes down.

Winter is the hard time, when the money made in the summer and fall has to keep the rent paid and kids fed while nothing is coming in. With immigration papers workers can get a little unemployment insurance benefit, but with no papers workers can't collect it -- in fact, any benefit that requires a Social Security number is out of reach.  Everyone in this season can use a little work, but for undocumented people especially, even a few days of work make a lot of difference.

Much of the work in the winter is cleanup.  With the onset of the drought in California one farmer in a watermelon field near Merced began using drip irrigation to cut down on his water consumption. In the winter, therefore, the plastic tubes that carry water to the plants have to be collected so that leftover fruit and vines can be plowed under, and the field made ready for planting again in the spring.  The tubes are only good for one season.  After they're collected a recycler is paid to dispose of them.

Drip irrigation is an important technique for organic growers because it waters only the plants growing fruit, helping to keep out weeds without using herbicides.  This kind of irrigation also decreases the vulnerability of the watermelon plants to diseases that can occur with the older system of overhead sprinklers.

Organic or not, few growers and contractors here supply any protective equipment for field cleaners.  Workers purchase their own cotton gloves to keep their hands from getting scratched and infected, but the thin cloth doesn't keep out water.  The field is full of mud, and workers buy big black garbage bags, tearing holes for their head and arms.  That's some protection, but water still seeps in quickly through sleeves and pants.  No one knows what chemicals might have been used here, or what's in the water that soaks their clothes after a few hours.

Most of the workers in this field come from Sinaloa.  Twenty years ago they might have gone home during the off-season, where the cost of living in their hometowns of Guasave or Los Mochis is a lot lower.  They might have spent the holidays with their families, and returned when the work starts up again in the spring.  Not any more, though.  Going home is too expensive for workers at minimum wage, regardless of their immigration status.  And those with no papers are held virtual prisoner in the U.S. by the combination of economics and immigration policy.

Taking inflation into account, wages have been falling in California fields for two decades.  Today a bus ticket home, or gas for the car, costs at least a week and a half of full time work at the minimum wage of $9 an hour.  For those who don't have papers, going home is virtually impossible.? Just the cost of a coyote to take a returning worker through the desert and across the border is at least $2000.  At $9/hour that's more than a solid month of full time work.

And many people don't make it.  The cemetery in Holtville in the Imperial Valley holds the remains of hundreds who die on the border journey every year, many of whom are found in the desert with no identification, and buried with no name.

So in the west San Joaquin Valley town of Gustine, the trailer parks are full in the winter.  The town is evenly divided between residents descended from the Portuguese immigrants who arrived two or three generations ago, and more recent arrivals, mostly from Moyahua in Zacatecas, even further from California than Sinaloa.?

Some people get jobs pruning grapevines and cleaning almond orchards, two of the few relatively dependable sources of winter work.  But unemployment hits hard here too.  The town was once a center of the dairy industry, supplying milk and cheese to nearby cities.  The dairy industry has grown elsewhere in the San Joaquin Valley, but Gustine's cheese plants closed one after another over the last two decades.  Its original cheese factory, the New Era Creamery, was built in 1907 when the railroad line was extended down the valley's west side.? New Era closed in 2005, just short of a century in operation.  Last year what remained of the structure burned down, leaving residents with even fewer alternatives to labor in the fields.

In the winter, even that labor is hard to find. 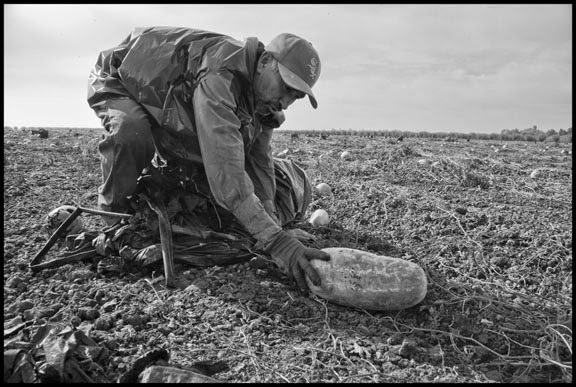 MERCED, CA  -- Bonifacio Villegas, an immigrant farm worker from Guasave, Sinaloa, cleans watermelons from a field after harvest. Villegas is a photographer who worked in Merced before he lost his camera, and went back to the fields to earn enough to get another. 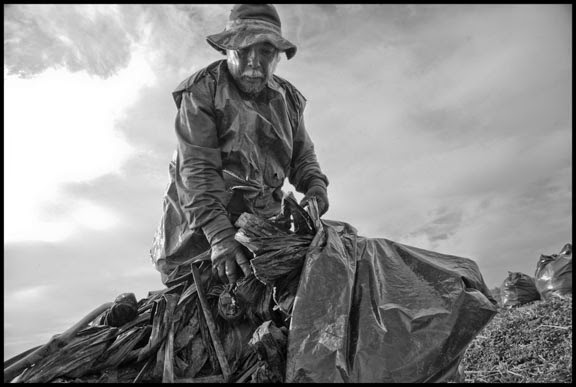 MERCED, CA  -- Vidal Cota is an immigrant farm worker from Los Mochis, Sinaloa.  He cleans the plastic tubes used for drip irrigation from a watermelon field, after the melons have been harvested. 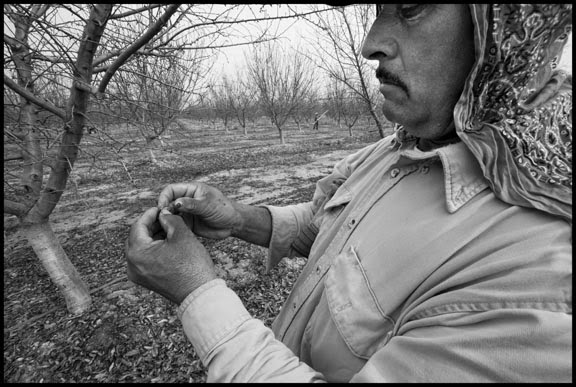 MADERA, CA -- A crew of farm workers clean almonds from trees in a field near Madera.  The crew is made up of immigrants from Oaxaca, Mexico.  They have to knock the old almonds off the branches, because they'll become infected with worms if left on the trees. Enrique Zavala breaks open an almond to show how it can become infected. 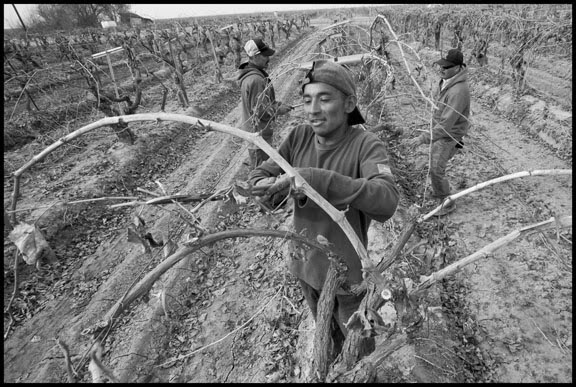 MADERA, CA -- A crew of farm workers from Oaxaca prunes the vines that grow grapes for raisins, in a field near Madera. 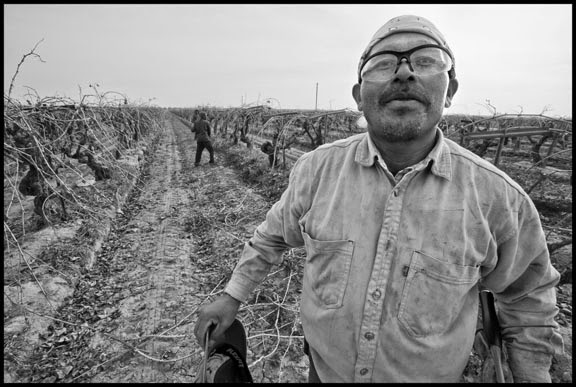 MADERA, CA -- Juan Florencio Martinez Alvarado lives in Madera, and gets a few weeks of work in the winter in a crew of farm workers pruning vines that grow grapes for raisins.  During the summer he goes north to Oregon and Washington, when the heat in the San Joaquin Valley rises to over 100 degrees.  In the winter, though, it can get so cold he says his hands get numb. 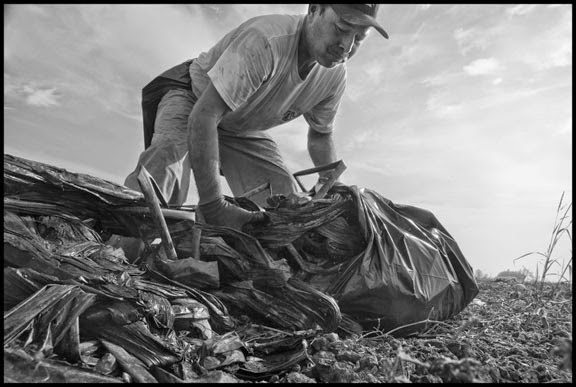 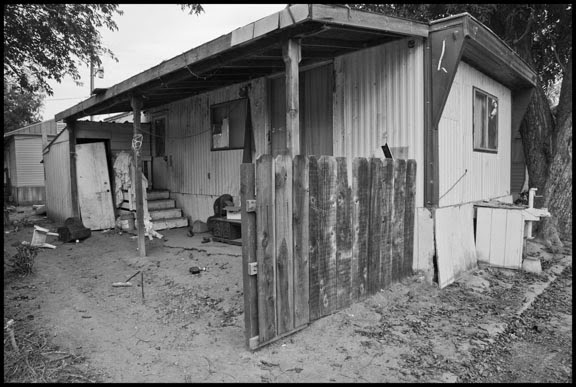 GUSTINE, CA -- A trailer home of immigrant Mexican farm workers in Gustine, a poor town on the west side of the San Joaquin Valley. 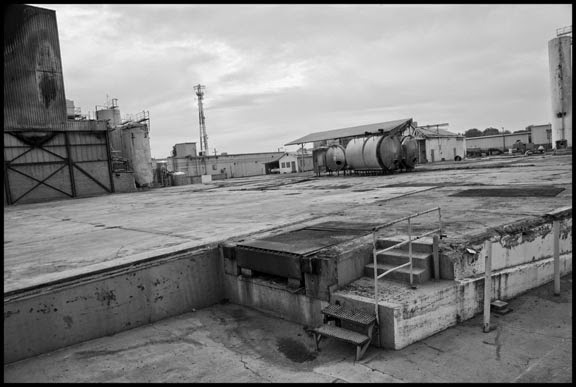 GUSTINE, CA -- The abandoned New Era Creamery cheese factory in Gustine, which closed in 2005 and burned down in 2014. 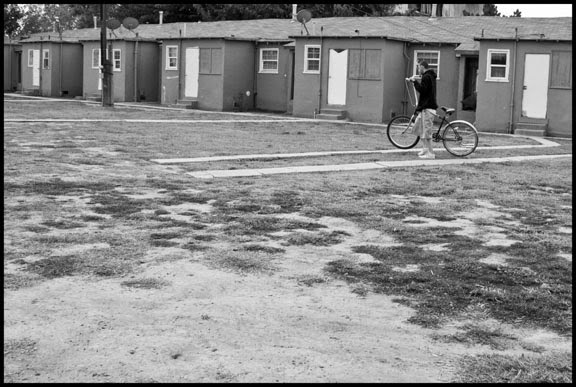 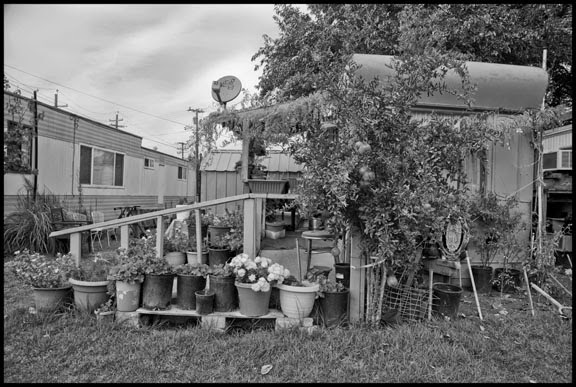 GUSTINE, CA -- In front of this trailer home a Mexican family has planted a pomegranate tree, which bears its fruit as the winter starts.
Posted by davidbacon at 12:57 PM No comments:

FIESTA IN SAN MIGUEL DE ALLENDE - HOW THE TOWN CELEBRATES

SAN MIGUEL DE ALLENDE (9/29/14) -- During the town fiesta of San Miguel de Allende musicians and food stalls line the streets at night.  The fiesta includes a blessing of the horses from surrounding ranches. Then the town sets off two sets of fireworks.  In one handmade paper mache dolls explode while young people rush to collect the pieces. At night big fireworks are set off on tall towers in the zocalo while the crowd watches.

San Miguel was the first town liberated from Spanish rule in 1810 by Miguel Hidalgo y Costilla and Ignacio Allende (for whom the town is named) in Mexico's War of Independence.  The muralist David Alfaro Siqueiros taught at the art school founded here during the presidency of General Lazaro Cardenas. 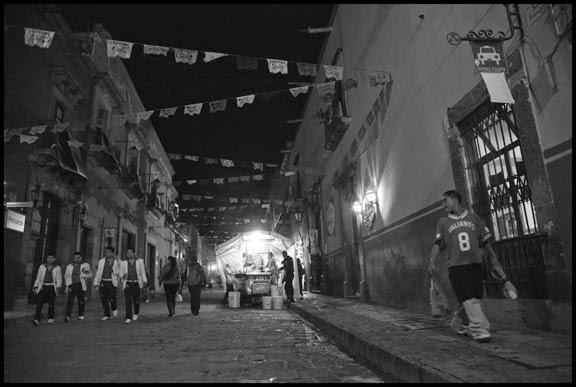 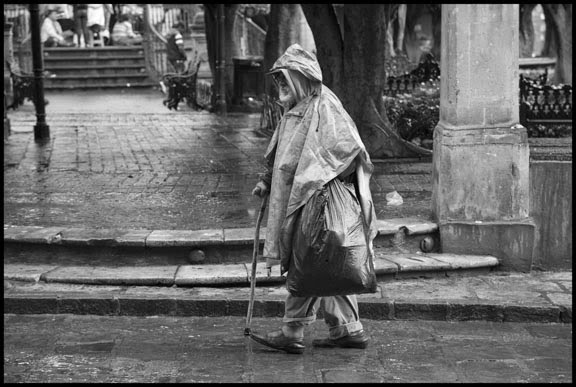 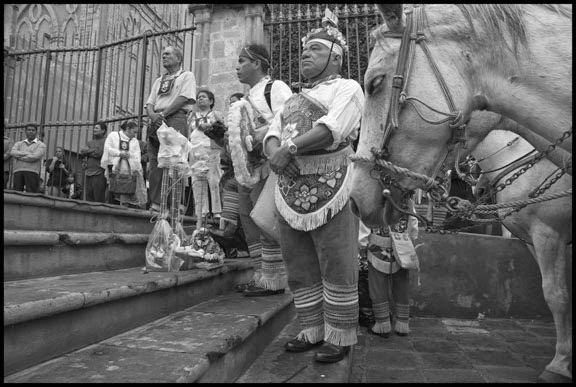 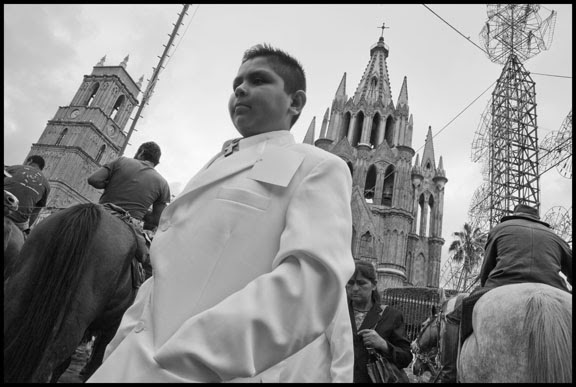 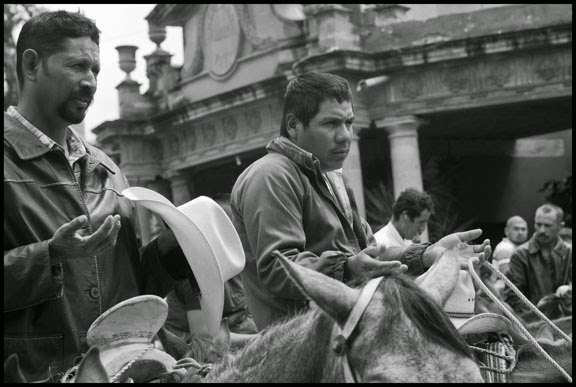 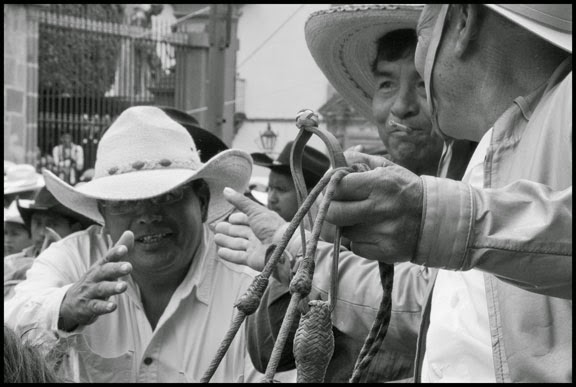 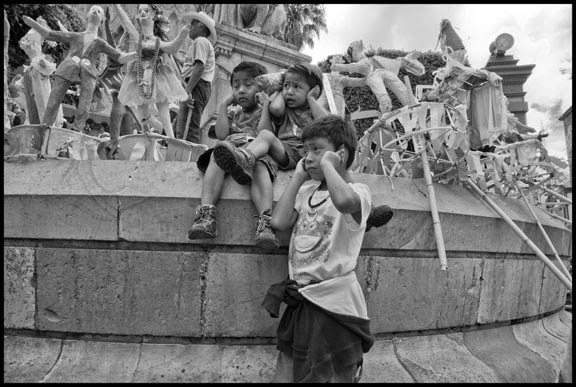 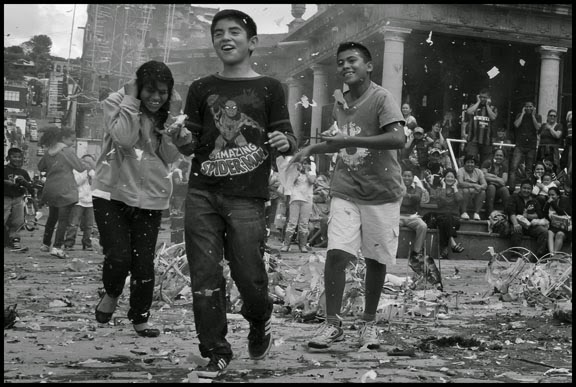 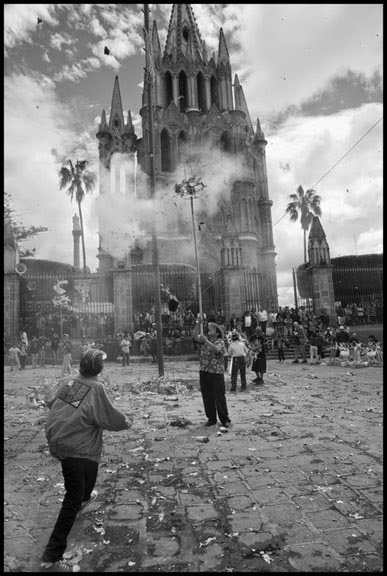 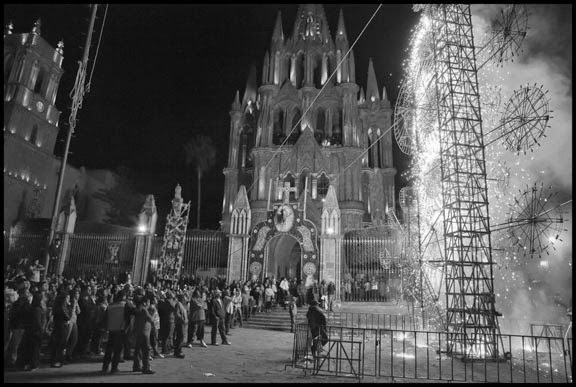 Posted by davidbacon at 2:06 PM No comments:

SAN MIGUEL DE ALLENDE (9/29/14) -- For three days during the town fiesta of San Miguel de Allende indigenous dance groups converge here, and dance through the streets from morning until late at night.  Costumes celebrate everything from religious symbols to mythologized history to a common bond with the culture of native peoples north of the U.S. border.  Almost 40% of San Miguel residents are Otomi and 20% Nahua, but the dances are performed by groups from all over Mexico.

Indigenous people in Izcuinapan, the original native community located here, had a long history of resistance to the Spanish colonizers.  Guamare and Chichimeca people attacked the first Spanish settlement, and the Spanish viceroy was eventually forced to recognize a limited independence for the indigenous people here. 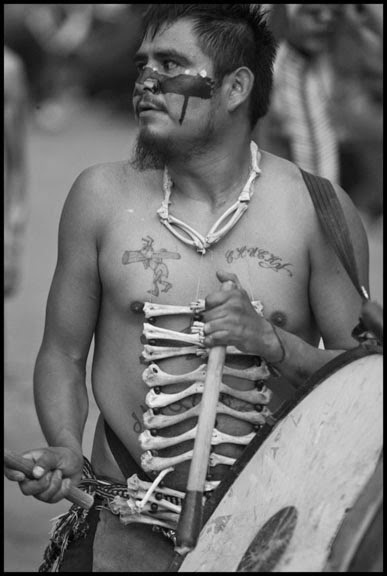 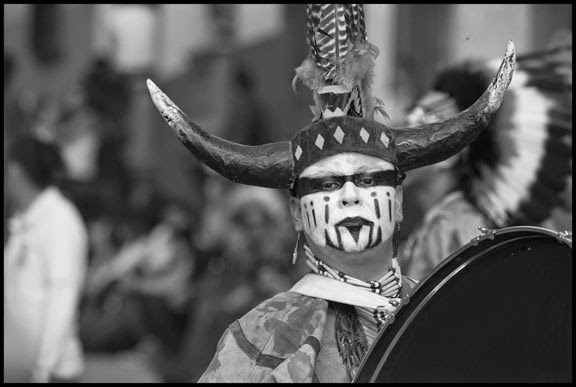 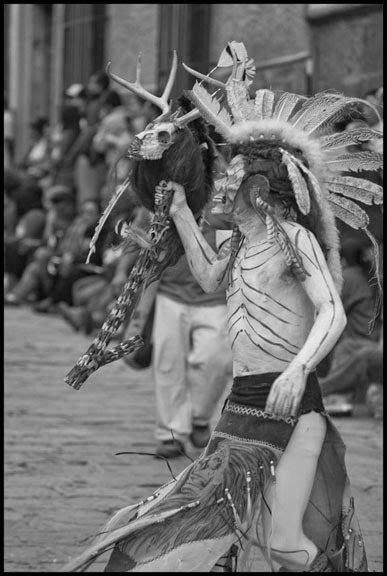 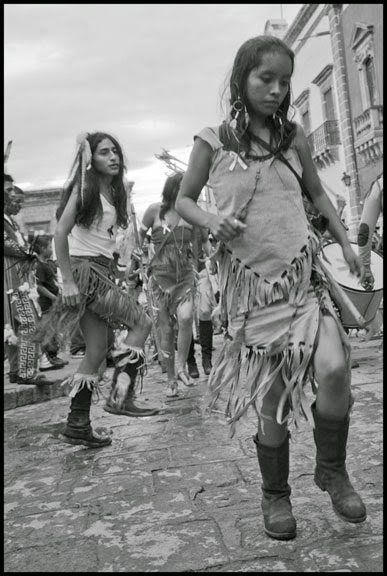 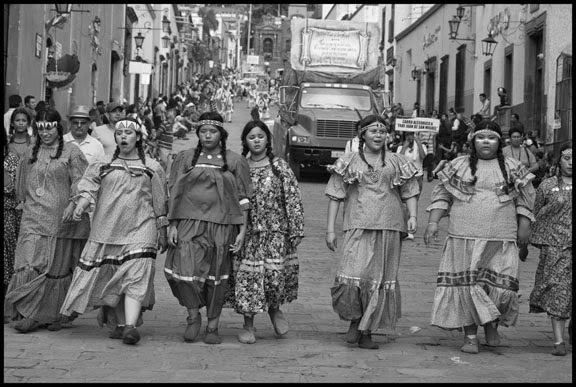 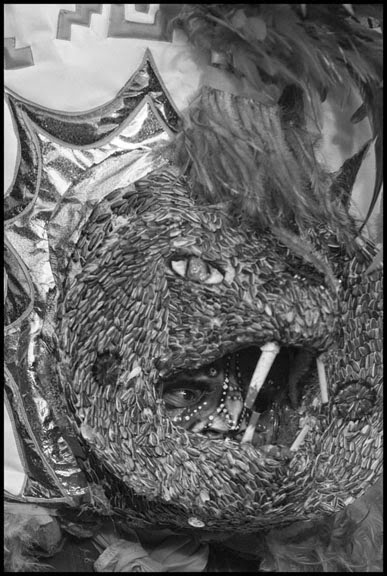 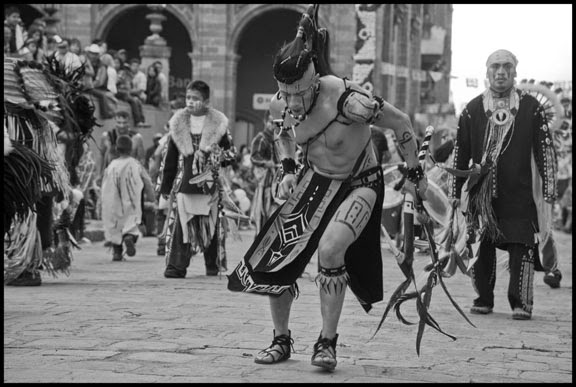 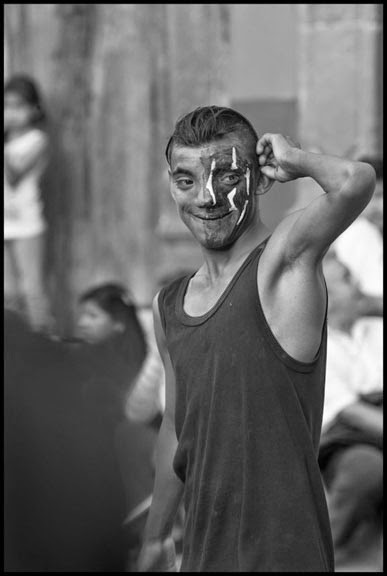 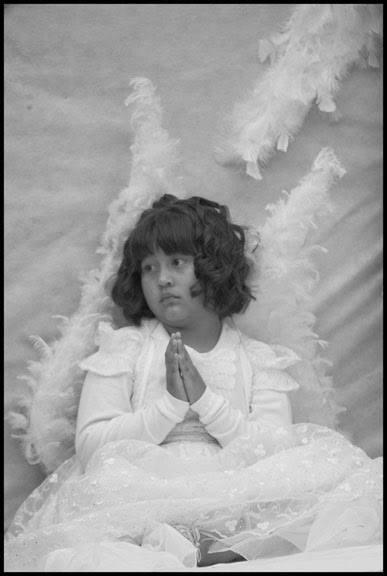 Posted by davidbacon at 12:51 PM No comments: