When I was a kid in high school, I'd play hooky sometimes and wander the streets in San Francisco.  There was more life on the streets then than there is now.  Today a lot of San Francisco's street life is made up of people living on the streets.  They're the ones business owners want the police to push out, so that customers can rush into the stores without having to look at poverty.

I like street life, though, and the bigger the mix of people the better.  Whenever I go anywhere, I look for it, trying to recreate that old feeling of freedom I used to get from cutting school.  Berlin has a lot of it, and it often seems very familiar.  Buskers play and perform in the S-Bahn and U-Bahn stations - one man playing a cello while his neighbor on the bench mimes an operatic accompaniment.  Is he part of the act, or just inspired?

For all its German cleanliness and order, in Berlin people still beg on the streets and sleep in the parks.  Turning a corner in the S-Bahn station tunnel, there's someone sleeping tucked up against a wall.  In the park above, florescent graffiti spread across another wall, while someone has spread their blanket and mattress below it.  A woman with a paper cup begs for change on a busy corner; well-dressed men and women look away as though she's not there.

The streetlife in Kreuzberg includes the elaborate Prinzessinnengarten community garden.  On the weekend, people trying on used clothes at the booths set up along its pathways create a massive pedestrian traffic jam.  Inside the garden they lounge at a cafe, check out the books at its library and celebrate feminist culture at the wall of women sheroes - artists Vaginal Davis and Christa Adamiec, poet Rery Maldonado, Mijal Bloch - a world traveler, and more.  Berliners clearly can't help being organized - the garden's plants grow in rows of elevated bins, while water and nutrients flow down hoses from a wall of black plastic tanks.

It's not hard to find Berlin's street life.  While in the old East Berlin the streets are pretty quiet, streets like Oranienstrasse are lined with outdoor tables.  The people eating and drinking look like they come from all over the world.  They shout.  They laugh.  They hug each other.  It's what I was looking for when I cut high school, and took the bus to Grant Avenue in San Francisco to find the beatniks. 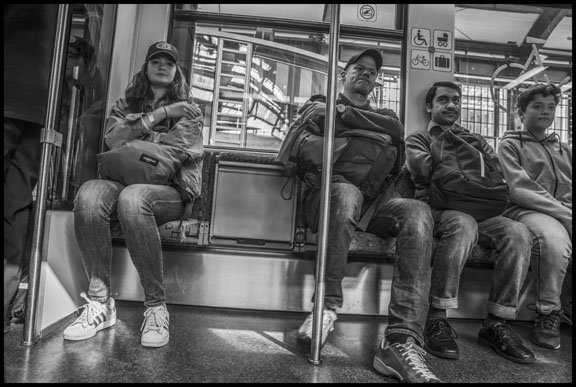 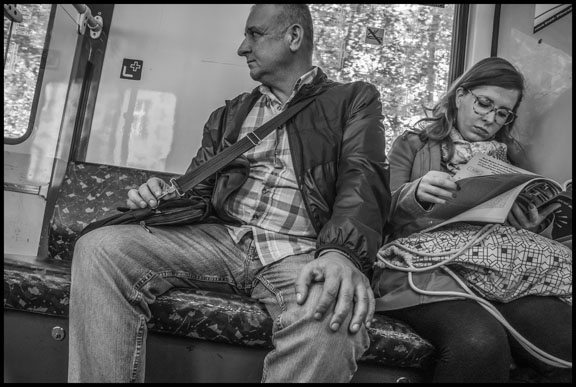 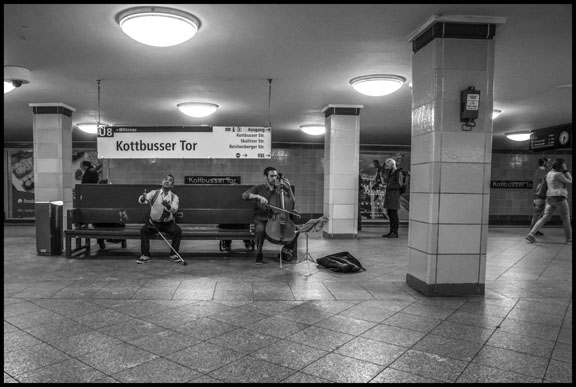 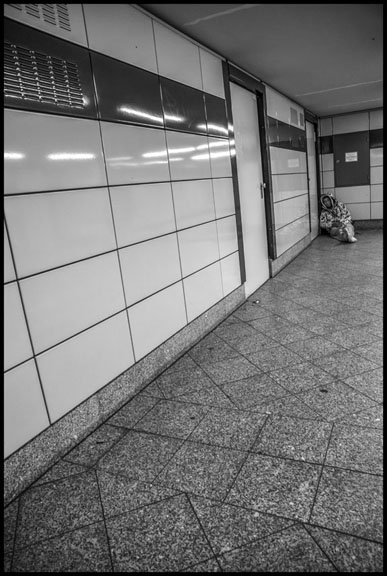 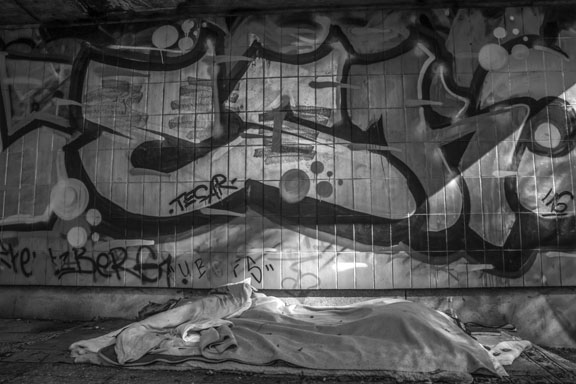 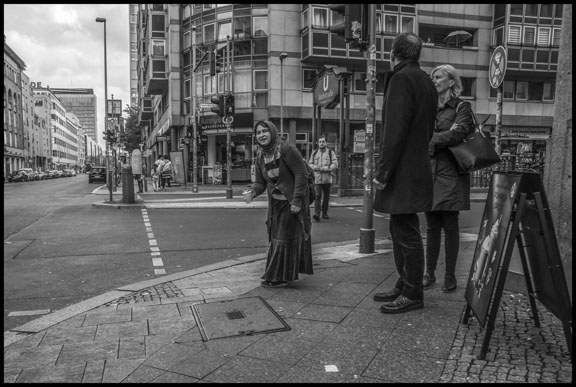 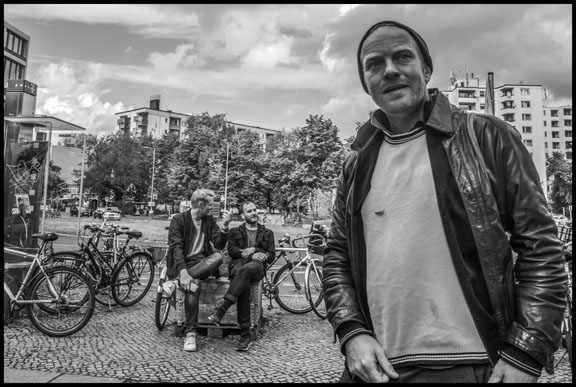 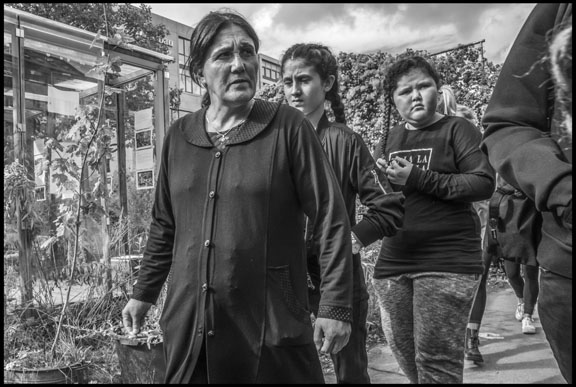 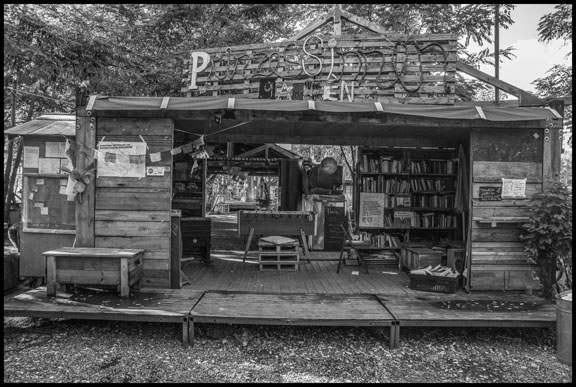 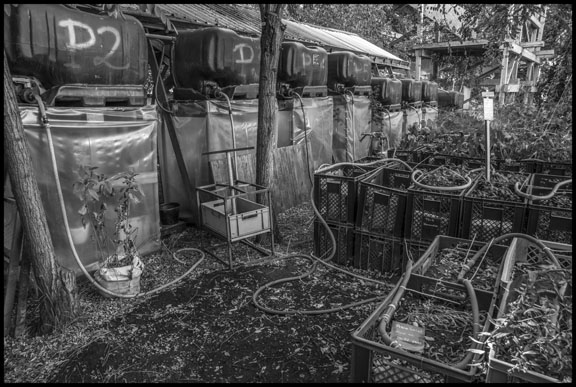 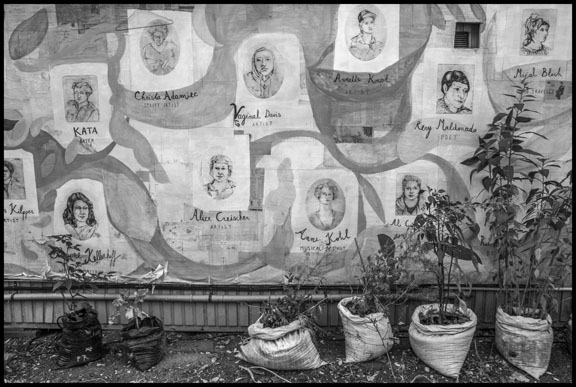 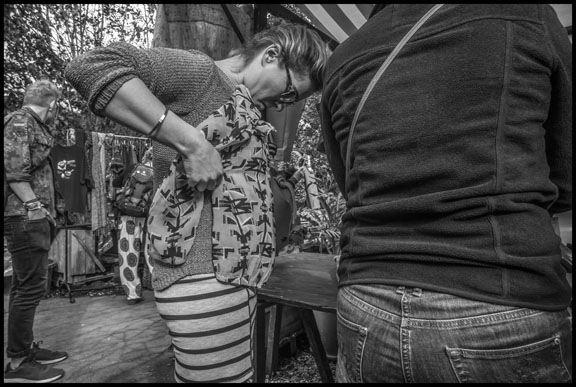 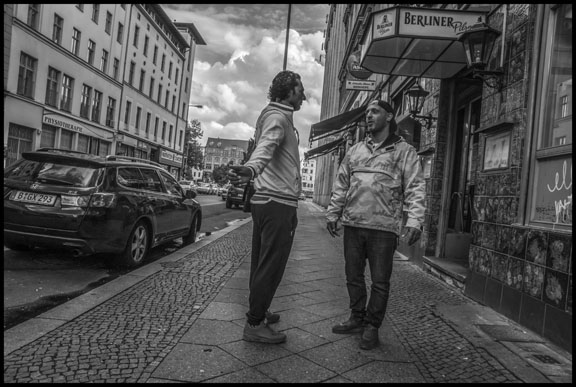 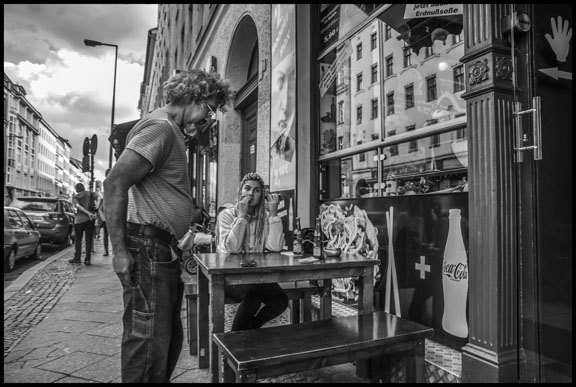 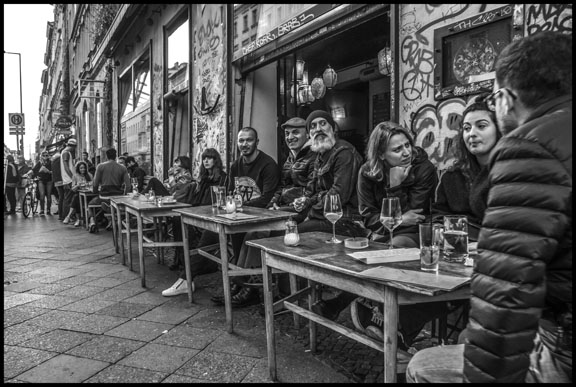 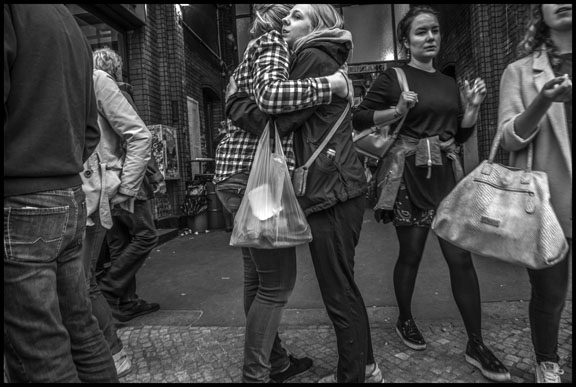 GUADALAJARA IN THE STREET

GUADALAJARA IN THE STREET
Photoessay by David Bacon

The International Book Fair is a big deal in Guadalajara - hundreds of publishers and millions of books.  So many students come that it seems like the city must have closed all the schools and commanded their attendance.  At least they read books, you think - then you see that kids looking at the screens on their cellphones are as common as the ones studying the printed page.

The fair is Guadalajara's official culture.  Behind and around it is the culture of its streets.  A mile away downtown the world's biggest covered market provides shelter for small vegetable and fruit sellers or clothes merchants, still trying to compete with Guadalajara shopping malls - the biggest in Mexico.  In the municipal market ranks of lucha libre superhero masks crowd a display next to bird cages.  Around the corner butcher counters and stands selling aguas, tortas and pozole are the magnet for the country people coming into the big city.

Near the market in the downtown zocalo, in sight of the cathedral, fired teachers set up a protest camp last April and are still living in their tents there today.  Mexico's street culture of social protest erupts even outside the book fair.  One teacher, fired in last year's wave of strikes against corporate education reform, hails passersby with his mic and small loudspeaker for hours on end, handing leaflets to the students who stop to listen.

And behind the cathedral stand the people with no money at all - hands stretched out, extending bowls and hats to gather change and small bills.  It's not the waves of tourists who give, though.  Those same young students with their backpacks full of books put their hands into their pockets to see what they can spare. 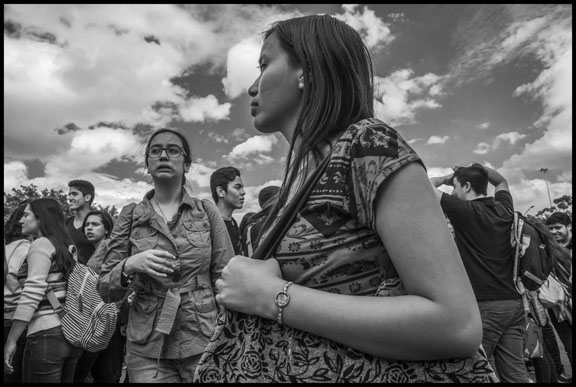 This is the 30th annual book fair, and it draws publishers and writers from all over the world..  Students look around for classmates before heading inside to see if they can meet a favorite author, or at least someone famous. 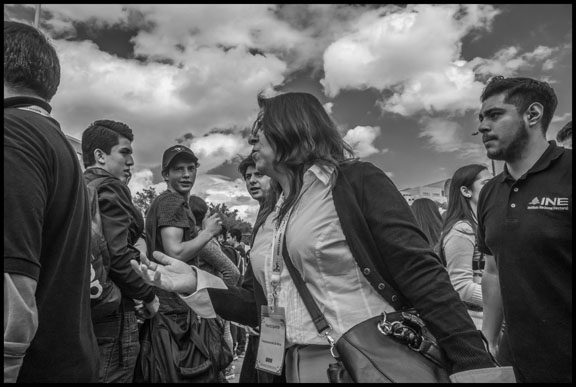 The authors and publishers' reps can hardly make it through the crowds of young people to the entrance. 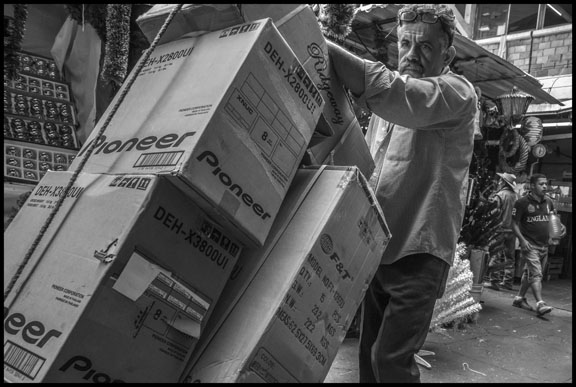 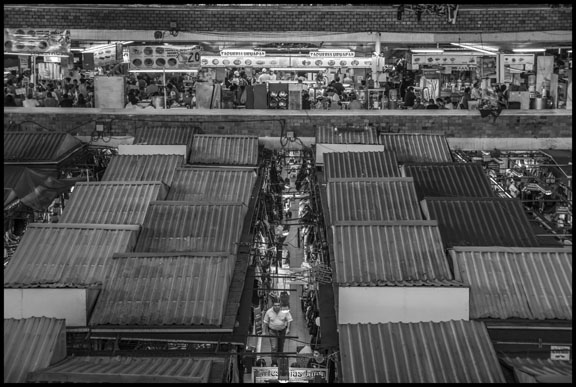 The market has multiple levels, with big open areas surrounded by balconies with restaurants.  At the bottom the stalls with their metal roofs crowd together, lining the passageways from each other. 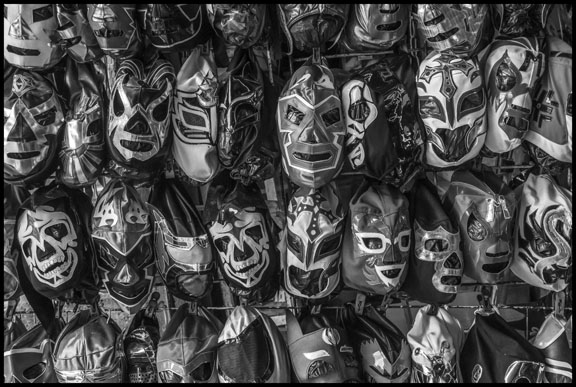 This is the attraction for hundreds of kids coming to the market - the masks of their lucha libre wrestling heroes.  You have to buy at least one. 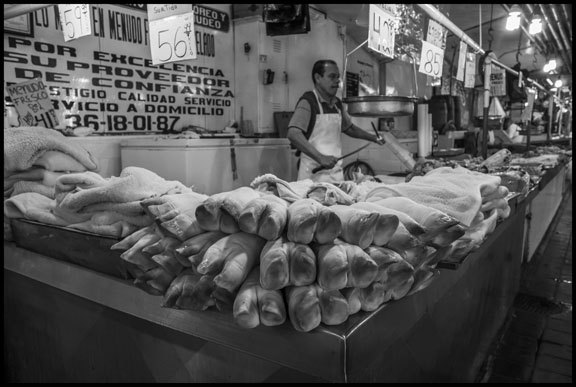 White pigs feet with their pink toes and hooves line the butcher's counter, while he sharpens his long knife to cut up the next order. 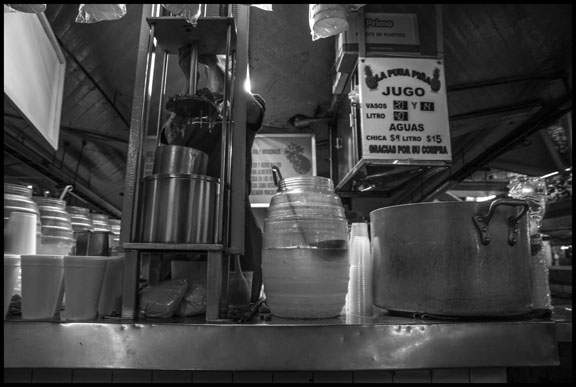 The stalls selling aguas, the drinks made with fruit and sugar water, have entered the digital age.  A digital readout gives the prices for glasses and liters for juice.  Inflation and devaluation are eating up the peso, so the price changes every so often and the peso sinks. 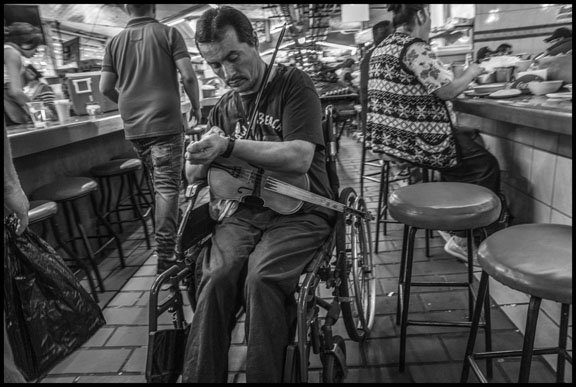 A violinist in his wheelchair checks his watch after getting a bite to eat.  Maybe he has a spot in the market to play for only a certain time, and can't be late. 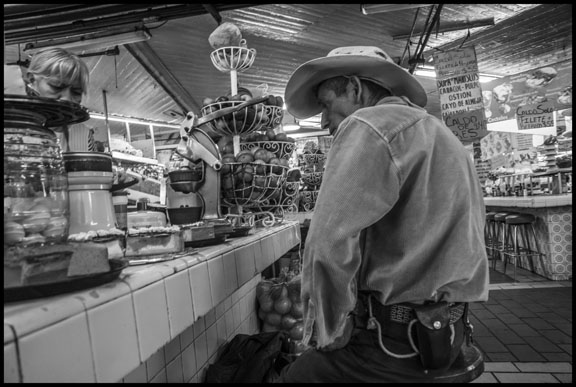 A campesino from the countryside sits at a booth where the woman behind the counter makes him a juice drink from beets and oranges. 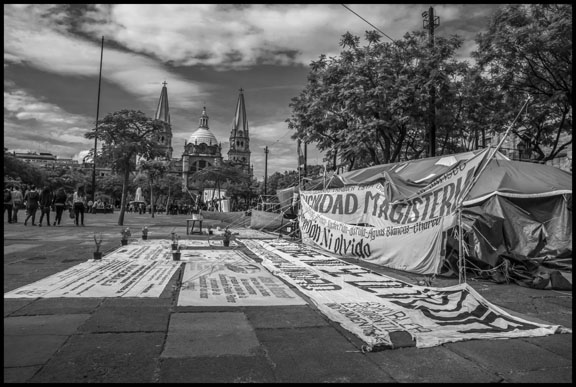 In sight of the cathedral, in the middle of the downtown zocalo, fired teachers have spread out their protest banners and set up the tents of their planton.  They've been there since April, when they lost their jobs in the strikes protesting corporate education reform. 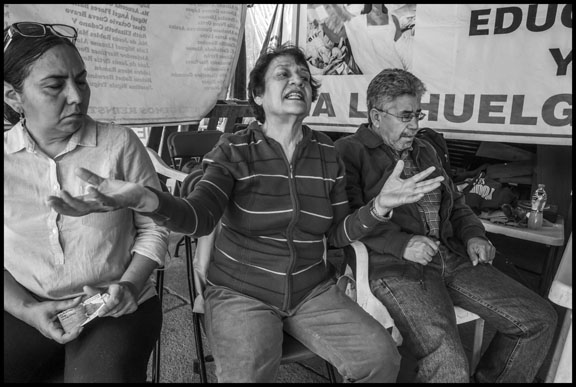 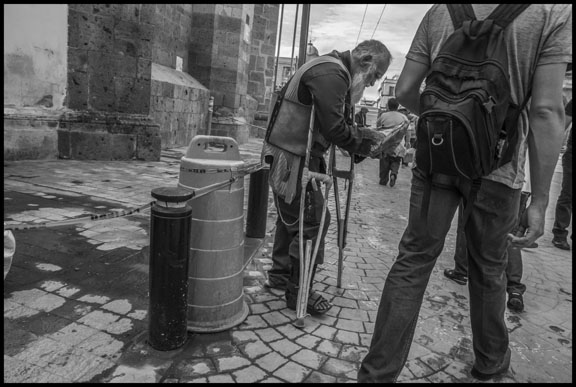 An old man on crutches checks his hat to count the money he begs.  A student with his backpack passes by, deciding whether his has enough change in his pocket to give him some.
Posted by davidbacon at 6:53 PM No comments: