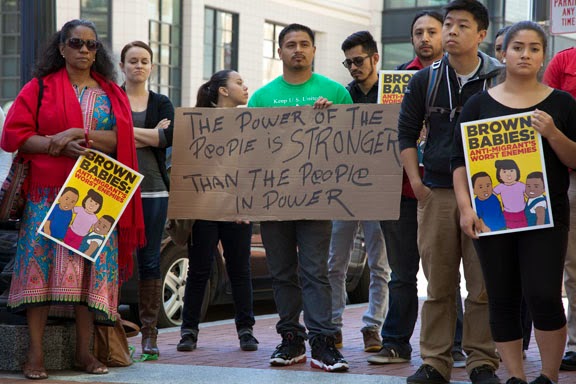 Oakland youth protest the deportation of children from Central America in front of the Federal Building.


U.S. President Barack Obama announced on September 6 that he will not take any action suspending deportations of undocumented immigrants until after the November election. One White House official told the NY Times, "Because of the Republicans' extreme politicization of this issue, the president believes it would be harmful to the policy itself and to the long-term prospects for comprehensive immigration reform to announce administrative action before the elections."

The President has been under pressure from Latino and Asian communities and unions to stop the wave of deportations that have totaled more than 2 million people during his administration, or about 400,000 per year. He has made repeated promises to provide provisional legal status to some portion of the 11 million undocumented people in the U.S.  The latest was a promise last spring that he would act on his own if Congress didn't pass immigration reform legislation by the end of the summer.  White House sources told the media that pressure from conservative Democrats campaigning against rightwing Republicans convinced him to abandon that promise.

Many immigrant rights activists across the political spectrum condemned that decision. "Obama cannot be trusted in matters of immigration" concluded Nativo Lopez of the Hermandad Mexicana in Los Angeles.  Mary Kay Henry, president of the Service Employees International Union, told the Times, "the White House decision to delay executive action forces countless families to continue to wait in the shadows of fear."

Besides protecting Democratic candidates, President Obama said he was motivated by a desire to keep the Democrats' comprehensive immigration reform bill alive. Many unions and immigrant rights groups, however, opposed the reform bill backed by the administration, S 744, because it would have increased deportations and the firing of workers who lack immigration status, and would have established new contract labor, or "guest worker," programs. Republicans in the House of Representatives blocked this bill for the past two years, and are not going to allow it to pass after November either.  Postponing executive action to stop deportations will not make this bill more palatable to them or increase its chances of passage.

Neera Tanden, a former Obama aide who heads a Washington DC-based lobbying group, the Center for American Progress, defended the bill: "Even with a strong coalition, it needed to be a balanced bill - you can only get citizenship if you get tougher enforcement." Grassroots groups, however, accuse lobbyists and politicians close to the administration of undermining the pressure to stop deportations, by accepting them as the price for reform.  In July a group of undocumented people visited the Center for American Progress and other Washington DC lobbying organizations, and sat in at the offices of Congressional representatives, chanting "No more meetings about us, without us!"

"It is not enough for immigration lobbyists in Washingtonˇto be the sole group of stakeholders meeting with President Obama," explained Maru Mora Villapando of of Not One More, a national campaign to stop deportations.  Mora is one of the organizers of a series of hunger strikes and protest actions outside the Tacoma, Washington, detention center. "History has shown that people directly impacted by unjust policies are the best advocates for ending them," she added.

Tefere Gebre, AFL-CIO Executive Vice President, announced in response that he would not meet with President Obama on immigration until the President met with directly impacted undocumented people. At the Center for American Progress, however, Marshall Fitz, the director of immigration policy, spoke with the group for a few minutes and then issued a statement saying, "I cannot make that pledge on behalf of CAP."

President Obama has been in retreat before a conservative offensive on immigration since June, when a rightwing website, breitbart.com, kicked off a campaign of hysteria about the arrival of unaccompanied minors from Central America on the U.S./Mexico border. Breitbart.com published photographs leaked from the Border Patrol and guards in detention centers, showing immigrant children packed together like animals.

The Tea Party then used the photographs to whip up hysteria - to attack President Obama's 2009 executive action deferring the deportation of some young people, to kill any possibility he might expand it to prevent the deportations of others, and to push for more resources for the Border Patrol and more detention facilities. Tea Party activists also sought to ensure that no Republican would be willing to consider an immigration reform bill that offered legal status to undocumented people.

The original breitbart.com story was written by Brandon Darby, a former FBI informant turned rightwing blogger.  Mike Nicley, another anti-immigrant blogger, wrote: "Obama's steadfast refusal to enforce our immigration laws is directly responsible for the current 'humanitarian crisis.'"  He claimed, despite the administration's mass deportations and detentions, that "word has spread throughout this hemisphere that America has laid a welcome mat along our southern border."

This narrative, repeated by the mainstream press, was picked up by conservative governors Rick Perry of Texas and Jan Brewer of Arizona, who said the children should be kept in detention, not released to find relatives, as a law passed in 2008 currently requires.  Republican Congressman Louie Gohmert claimed the children were "putting lives of Border Patrol agents at risk."

Instead of rejecting this narrative, the White House announced it intended to abrogate the 2008 law, and deport those minors picked up on the border more quickly.  A White House factsheet said:  "Additional steps to enhance enforcement and removal proceedings [and] surging government enforcement resources ... will allow ICE to return unlawful migrants from Central America to their home countries more quickly."

In August President Obama asked Congress for US$3.7 billion, almost entirely for more enforcement.  The U.S. currently spends more money on immigration enforcement than all other law enforcement programs of the Federal government combined, and deploys over 20,000 agents along the border, more than it has at any other time in its history.

Marine Corps Gen. John Kelly, commander of U.S. Southern Command, framed migration as a national security threat, calling it a "crime-terror convergence."  In a Defense Department press conference Chairman of the Joint Chiefs of Staff Martin Dempsey alleged, "Because of open borders and immigration issues, it [the Islamic State of Iraq and Syria] is an immediate threat." Rightwing politicians then began alleging that migrants crossing the U.S. Mexico border had possibly created "terrorist sleeper cells." Media coverage focused as well on gang violence in Central America, as though it was spontaneous and unrelated to a history of U.S.-promoted wars and a policy of mass deportations.

U.S. foreign and immigration policy is responsible for much of the pressure causing the flow of people from Central America.  The tide of Central American migration began during wars promoted by U.S. President Ronald Reagan in the 1980s, in which he armed regimes and contra armies opposed to progressive social change. Two million Salvadorans alone came to the U.S. during the late 1970s and 80s, along with thousands of Guatemalans and Nicaraguans. Whole families fled, leaving loved ones behind with the hope that some day they'd be reunited.

When governments or people resisted NAFTA and CAFTA, the United States threatened reprisals.  In El Salvador in 2004 Otto Reich, Assistant Secretary of State for Western Hemisphere Affairs, threatened to cut off the flow of remittances (money sent back home from family members working in the U.S.) if people voted for a leftwing party, the FMLN. The FMLN lost, and the following year a rightwing government signed CAFTA. In 2009 Honduras' wealthy elite overthrew President Manuel Zelaya because he raised the minimum wage, gave subsidies to small farmers, cut interest rates and instituted free education. The Obama administration gave a de facto approval to the coup regime that followed.

El Salvador, which today has a leftwing FMLN government, has a commitment to a policy of jobs and economic development, to provide an alternative to migration. But in Guatemala and Honduras, the U.S. is supporting very rightwing governments who only use a heavy enforcement approach, supported by U.S. funding and assistance.

Discussion of these root causes for migration has been almost entirely absent in the U.S. media. Politicians in Washington now even call for repeating the same steps that led to this migration in the first place.  New Jersey Democratic Senator Bob Menendez, for instance, called for increasing funding for the U.S. military's Southern Command and the State Department's Central American Security Initiative, giving millions of dollars to the army and police in Central American rightwing regimes. President Obama's request for US$3.7 billion included that funding.

And while retreating on promises to slow deportations, the administration began implementing a fast deportation policy for Central American youth, despite its dubious legality.  This measure will cause more pain for families, but fail completely to stop migration.  More people will continue to come to the U.S., driven by poverty and repression, made worse by pro-corporate trade agreements and foreign intervention.  At the same time, at current deportation rates, about 70,000 people will be deported just between the time of the President's announcement of the delay and the November election.

"He has stabbed us in the back," said Veronica Noriega, who recently undertook a hunger strike to demand the release of her husband, Ramon Mendoza Pascual, from detention at the Tacoma Detention Center.  "The Republicans openly said 'no' to us, but the President deceived us." Villapando added bitterly. "We know our long-term prospects better than anyone - the President has made us experts in our own suffering by unrolling policy after devastating policy targeting our families and communities. We know what needs to happen. The President has failed to listen to us, and now he has failed to act."
Posted by davidbacon at 8:49 AM No comments: