APPLE SHED STRIKES WIN RECOGNITION, AND THE FIGHT GOES ON 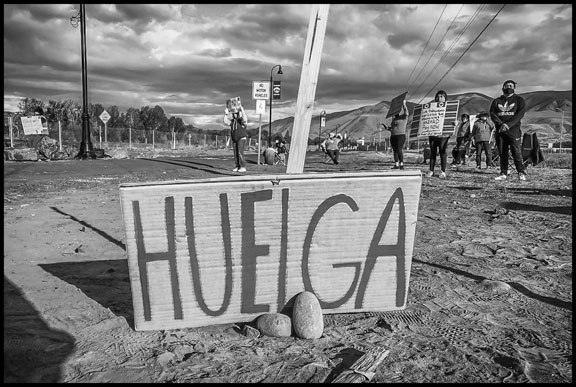 
Thirty four workers at the apple packing shed that sparked a wave of strikes in central Washington went back to work on Monday with a written agreement recognizing their workers' committee, Trabajadores Unidos por la Justicia (Workers United for Justice). Of the 115 workers at Allan Brothers who walked out May 7, the 34 stayed out for the full 22 days, during which hundreds of other workers struck at six additional sheds in the area.

According to Agustin Lopez, a leader of the movement who's worked in the valley since the mid-1980s, "The most important thing to us is that the company is recognizing our committee as the representative of all the workers. Under the agreement we will continue negotiating for salary increases, better working conditions, and health protections. The agreement means that our rights as workers are respected."

The shed strike wave was touched off by the impact of the coronavirus on the hundreds of people who labor sorting fruit in Yakima Valley's huge packinghouses.  While their numbers are smaller than the huge workforce of thousands who pick the fruit in the summer and fall, the shed workforce occupies a strategic place in this system of agricultural production. The virus has spread more widely here than in any other county on the Pacific Coast, with an infection rate of about 500 per 100,000. As of June 1 Yakima County had 3,891 COVID-19 cases and 90 deaths.  Twenty-four percent of people tested have been infected, and the local hospital system is at capacity with few beds available.

"The most important demand for us is that we have a healthy workplace and protection from the virus," Lopez explained at the start of the conflict. "Fourteen people have left work over the last month because they have the COVID-19."

During harvest time, trucks from the orchards haul loads of apples and cherries picked by thousands of farmworkers, laboring for the big growers of the Yakima Valley.  After the fruit is cooled and stored, orders from the grocery chains are filled by workers, mostly women, standing shoulder-to-shoulder in front of fast-moving conveyor belts.  As apples and cherries sweep past, they sort it and send it on to other workers who wash and pack it, and eventually load it onto trucks.  By the time it appears on the shelves of supermarkets around the country, the fruit has passed through many working hands.

Packinghouse laborers are almost entirely immigrants from Mexico, and most of the sorting jobs on the lines are done by women.  Their families make up the working-class backbone of the small towns of Yakima Valley.  Most have lived here for years.  Jobs in the sheds pay minimum wage, but they're are a step up from the fields because they offer year-round work at 40 hours per week.

While their numbers are smaller than the huge workforce of thousands who pick the fruit in the summer and fall, the shed workforce occupies a strategic place in this system of agricultural production.


REACHED OUT TO UNIONS

When the workers stopped work at Allan Brothers, demanding better safety precautions and $2/hour in hazard pay, they reached out to Dulce Gutierrez, who represents the Washington Labor Council in the Yakima Valley. Gutierrez in turn contacted Washington State's new union for farmworkers, Familias Unidas por la Justicia (Families United for Justice), at its office in Burlington on the coast. Ramon Torres, FUJ president, and Edgar Franks, political director, went to Yakima, where they've spent the last month supporting the strikers.

The first company to settle was the Roche Fruit Company, after a lunchtime walkout, bolstered by the presence of FUJ organizers, got the owners to increase a hazard pay offer of $200 per month to $100 per week. Strikes then followed at Jack Frost Co., Matson Fruit Co., Monson Fruit Co., Hanson Fruit Co., and Columbia Reach Pack.

To protect workers' organizing rights, Columbia Legal Services and FUJ's lawyer, Kathy Barnard from the labor law firm of Barnard Iglitzin & Lavitt, filed unfair labor practice charges against Allan Brothers. The workers' committee charged that managers interrogated workers about their strike activity, threatened them with discipline if they joined the strike, increased wages for non-strikers in an effort to buy their loyalty, and disciplined an employee who brought water to the picketers.  (The recognition agreement did not include an agreement by the workers to drop the charges.)

The company barred strikers' vehicles from its parking lot, but the COVID-distanced picket line at Allan Brothers held up even under threats. Sheriff deputies arrested one man who told strikers that he planned to return with a gun and shoot them. In response, two workers, Maribel Medina and Cesar Traverso, began a hunger strike on May 19, after reading Cesar Chavez's "Farmworkers' Prayer."


DELIVERY TO THE CAPITOL

When growers proved recalcitrant despite the pressure, workers increased it by going to the state capitol in Olympia on May 26. There they delivered 200 complaints against Allan Brothers to the  Department of Labor and Industries, and held a noisy rally outside the home of Democratic Governor Jay Inslee. "The companies thought they could contain this," Franks explained, "but it put a lot of pressure on them and made the strike a statewide issue."

One worker, Julietta Pulido Montejano, from Columbia Reach Pack, told state officials, "We are on strike demanding protections from COVID 19. We want the company to respect social distancing, and to provide us with daily masks. We want to be able to take care of ourselves so we can go back to our families and not get them sick." Thirty-one workers at Columbia Reach Pack have tested positive for the virus.

On May 22 the companies began to seek agreement, when the owner of Monson Fruit signed a written recognition of the workers' committee, providing better health protections against the virus and $1/hour in hazard pay. Workers there then returned to work. Workers also went back at Jack Frost Co. with a promise of an increase they have yet to receive, but without a written agreement.

At Matson Fruit the workers' committee was presented with a written agreement. "But when they saw it set up a company union," Franks said, "they rejected it, and they're still on strike and talking." At Columbia Reach Pack the company seems unwilling to negotiate, workers charge, and over 50 remain on strike.

At Allan Brothers, while the agreement was signed and workers went back to work, committee members acknowledge that the conflict has not really ended. "Our fight continues," said one committee member, Romina Medina. "But this agreement shows that we can still make important achievements after 22 days without working, without money and enduring intimidation, because we did not give up."

At Allan Brothers the Trabajadores Unidos por la Justicia committee accepted the $1/hour wage increase offered by the company, and that had been accepted at Monson Fruit.  That
$1/hour raise expires at the end of July, when the company has agreed to negotiate over wages.  Agustin Lopez said, "We are sure that we will achieve all our demands, because we will return with strength to the negotiating table then."

Torres believes that workers learned enough about collective action that they will be prepared to fight when the day comes. "It had a big impact on them," he says, "since it was the first time they'd done anything like this. They are building a base, and learning how to organize collective action to fight inside the workplace."

Gutierrez says that winning health protections inside the sheds is a critical victory, given the dangers of the coronavirus: "There's been progress made at all the warehouses with sanitation and safety. That is already a victory for every huelga [strike]."

The strikes are partly a product of political changes sweeping central Washington. Gutierrrez herself ran on a slate of progressive candidates who gained a majority on the Yakima City Council in 2015. She won 84 percent of the vote and became the first Latina elected to the body. That election, in turn, was the result of a voting rights suit that overturned Yakima's old citywide election system and ended decades of grower control of it.

Nevertheless, apple shed workers still confront an entrenched anti-union industry. Its biggest players, Stemilt Fruit Co. and Zirkle Fruit Co., bring thousands of H-2A guest workers into Washington every year for the apple harvest in late summer and the fall. They have a long history of fighting unions and dominate the agricultural labor policies of the state government, even in Democratic administrations.

Longtime farmworker organizer Rosalinda Guillen, executive director of the organization Community to Community, cautions, "This country gets its food supply on the backs of people who these companies treat as expendable. That hasn't changed at all.