"THE WORKERS OF SAN QUINTIN VALLEY ARE NO LONGER WILLING TO BE INVISIBLE"
Photoessay by David Bacon
Equal Times, 20 January 2016
http://www.equaltimes.org/the-workers-of-san-quintin-valley#.VqHH9MfueRB

On 29 March 2015, US photographer and labour activist David Bacon followed a group of farm workers in the San Quintín Valley in the Mexican state of Baja California as they marched to the US border.

Thousands of workers - who pick strawberries and tomatoes for the US market - went on a two-week strike in protest over their poverty wages. These farm workers, who mainly come from the southern Mexican state of Oaxaca and make up the bulk of the agricultural workforce in Baja, are paid about US$9 a day; they were demanding wages of about 300 pesos, or US$24.

The big companies walked out of negotiations with the workers March, and signed contracts with government-affiliated unions that were not on strike. They promised 15 per cent pay rises for the workers, which is much less than what they were asking for.

The biggest US distributor, Driscoll's, claimed its main grower, BerryMex, pays higher rates of US$5 to US$9 per hour - a highly dubious claim, according to activists. The growers want to move towards a code of conduct that avoids any negotiation or contracts with the striking union, the Alianza. At the same time, growers brought more workers up from southern Mexico to break the strike.

But at the top daily wage of 180 pesos, a Baja field worker has to work for almost three hours to buy a gallon of milk. Workers also say the companies are not abiding by the agreement, and have announced their support for a boycott of Driscoll's berries.

Fidel Sanchez, leader of the strike told Bacon:  "Consumers eat the fruits and the vegetables that these workers are producing, but know next to nothing about the workers themselves. This march, and the strike itself, show that workers are no longer willing to be invisible." 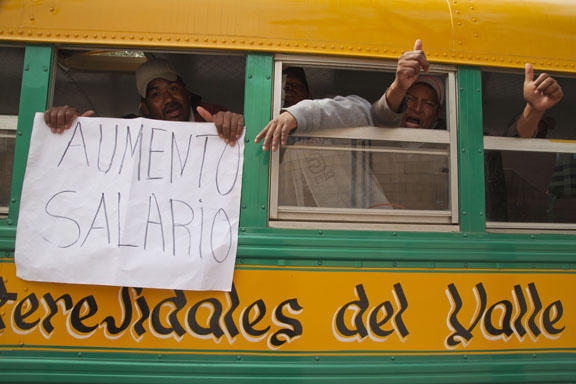 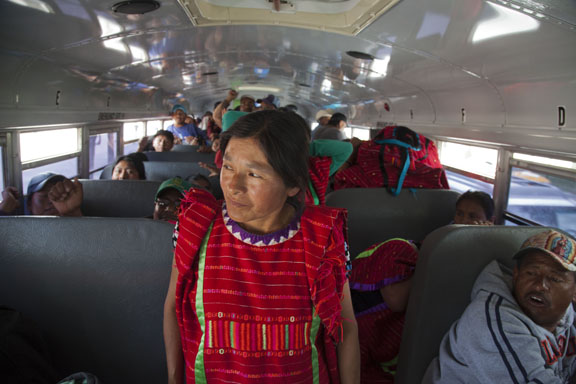 Strikers fill a bus headed for the border. An indigenous Triqui woman wears a distinctive huipil, or overblouse, from her hometown. Triqui women are famous weavers. The strikers are almost all indigenous Mixtec and Triqui migrants from Oaxaca, in southern Mexico. 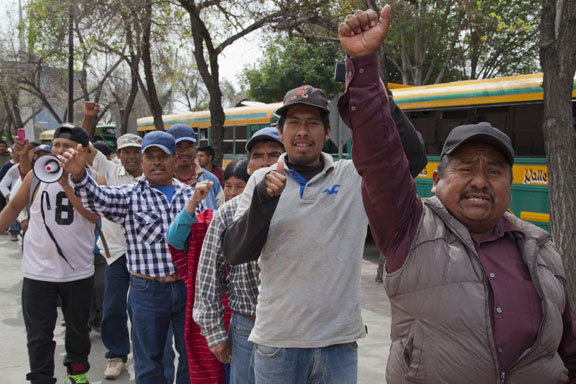 After getting off the bus in Tijuana, striking farm workers line up to march to the border. 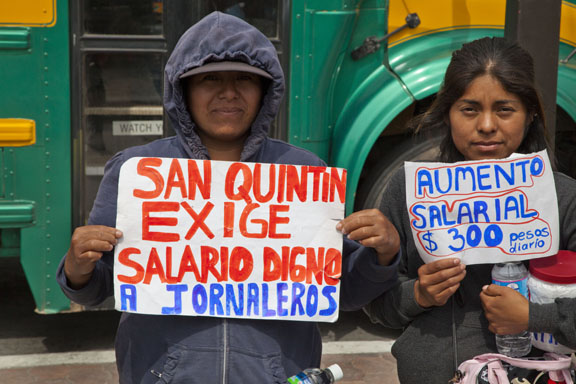 Two striking farm workers hold signs in front of the bus that has brought them to Tijuana. One says: "San Quintín Demands a Dignified Wage for Farm Workers." The other says: "Wage Raise to 300 Pesos a Day." 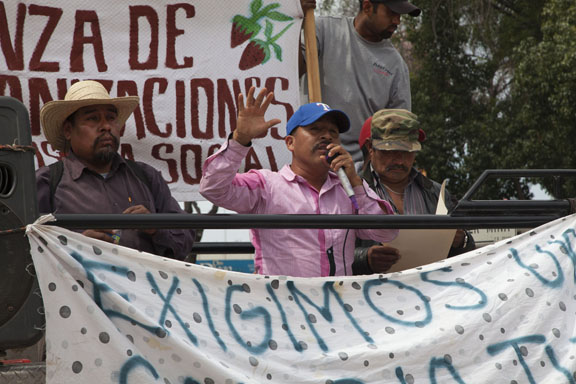 Bonifacio Martinez, a leader of striking farm workers, speaks at a rally as the workers prepare to march to the border. On the left is Fidel Sanchez and on the right is Justino Herrera, both were leaders at the time of the workers organisation, the Alianza.  Sanchez is still an Alianza leader, while Herrera left to form another organization. 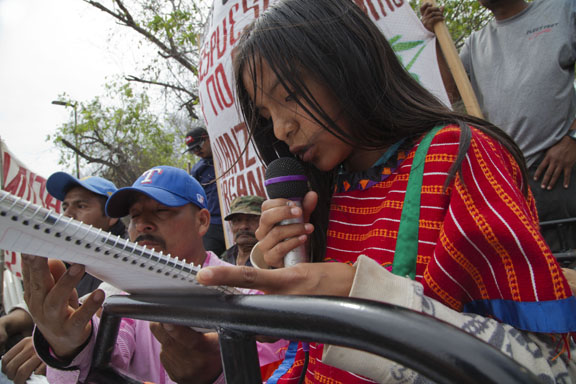 The daughter of a striking farm worker reads a statement she wrote about the reasons her family went on strike. She wears the distinctive Triqui huipil from her hometown in Oaxaca. 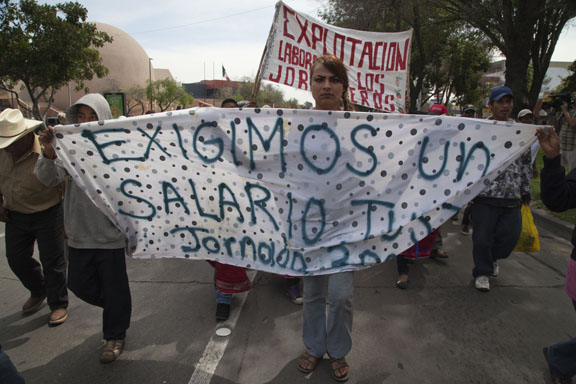 As the workers' march heads for the border, strikers carry a banner with their main demand. It says: "We Demand a Fair Wage of 300 Pesos a Day." 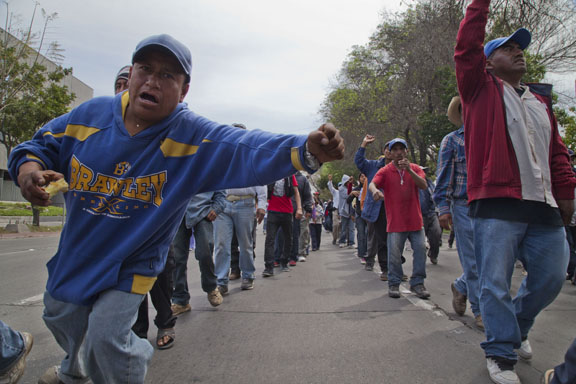 A double line of striking farm workers marches through the streets of Tijuana on 29 March 2015. 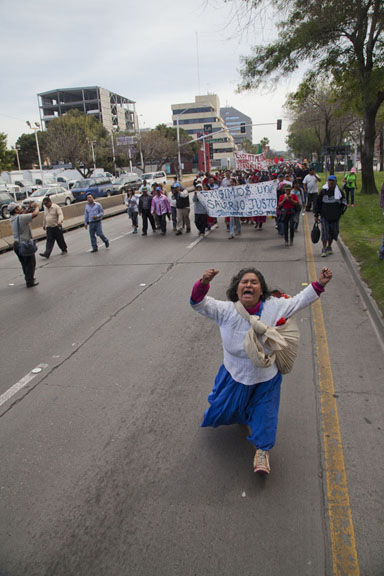 A woman can't contain her anger as the strikers march through the Zona del Rio in the center of Tijuana. 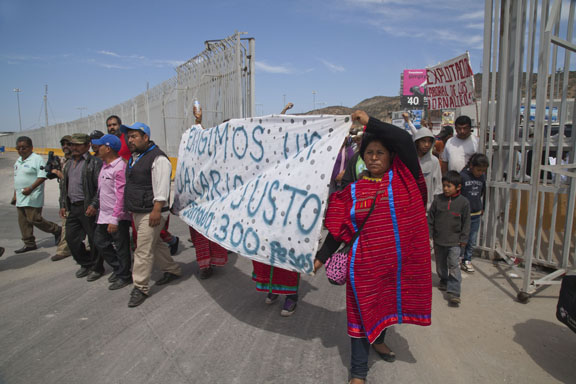 Indigenous Triqui women lead the march of striking farm workers as it arrives at the fence at the Mexico-US border. Workers marched to the border to draw attention to the fact that the tomatoes and strawberries they pick are exported to the US.